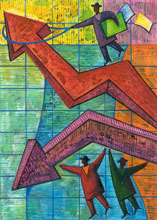 At the risk of oversimplifying the relationship between selling and negotiating, the former is about meeting the customer’s stated needs while the latter is about capturing the value in a deal that benefits both sides. In other words, they go hand-in-hand, or at least they should. For example, even if a salesperson does a great job selling, that is, creating value, without a sound negotiation strategy it’s unlikely that full value will be captured, and the salesperson will probably end up with a deal that rewards him or her with less value than the customer receives. Alternatively when a salesperson does a poor job selling, even if he or she is fortunate enough to have a negotiation, it will almost always default to a price only discussion.

Unfortunately, even among those organizations that provide salespeople with training in both sales and negotiations, more often than not sales training is offered in one fiscal year and negotiation training in the next, so they appear to be separate and seemingly unrelated activities. As a result, the training fails to address the interconnection between the two processes. In effect, training salespeople in this manner is the same as training a carpenter to use a hammer one year and a saw the next. The salesperson (or the carpenter) would essentially be out in the market for a year with only one half of his or her toolbox. And to make matters worse, the supplier who provides the sales process training is usually different from the supplier who provides the negotiation training. So the sales team now has two disconnected processes designed to fill out two different kinds of blank forms. This is not only difficult for salespeople to deal with given their daily challenges, it’s also difficult for coaches to coach to, or for management to embed into the customer relationship management process.

An even bigger problem with this approach is it doesn’t match the reality of the market. Based on our research with Strategic Account Management Association (SAMA), most sellers are in relationship markets rather than transactional ones. That is, customer relationships are becoming more complex and longer-term. Most sales organizations, in fact, have been transacting with the same customers for many years. And while it’s true that both salespeople and leaders change, there is still organizational memory on both sides of the table about how deals are done, who pushes back on what, what items are given away, etc. At a higher level, the market follows patterns in the way deals are negotiated. For example, many follow the razor and razor blade model, in which aspects of value are simply given away as a cost of entry. In addition, past deals between a particular buyer and seller, as well as industry norms for doing deal, all set precedents that impact the next and later negotiations.

If, however, companies integrate selling and negotiating they will be able to develop a Value Exchange that is both selling and negotiating. Doing so will enable them to supply their salespeople with the kind of data they need to develop value, recognize and leverage patterns in selling, and keep up with the competitive landscape, changing corporate priorities, customer needs, and regulatory and other changes taking place in the market. This approach to
assisting customers in making value-based decisions when choosing a supplier, and helping salespeople make better commercial decisions for their company, yields great results in terms of process, market share and margin.

Dave Stein, CEO of ES Research, sums up what’s happening in the marketplace by saying:  “We see the B2B customer buying cycle/supplier sales cycle as being a series of negotiations. Winning salespeople negotiate for access to senior executives, information, mini-agreements all along the way. To think selling and negotiation are separate is old thinking and serves to hinder, rather than help, sales effectiveness.”

If you'd like to know more, we would be happy to send you our white paper entitled, The Evolution from Sales and Negotiation to Value-Based Decision Making.