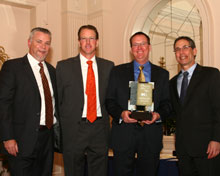 Think! Inc. began working with InterContinental Hotel Group (IHG) Franchise Sales & Development in the summer of 2011. The IHG Franchise Sales & Development leaders had placed a high value on the topic of strategic negotiations however this was the first time they had reached outside the company for formal training.  The negotiation blueprinting process has proven to be fruitful in several areas including; more thorough client engagement, understanding both parties alternatives and the impact associated with those alternatives, creative ways to broaden the deal structure, providing multiple offers and proactive deal governance.

In 2013, the team awarded their first ever Blueprinting Deal of the Year Award. Shawn Siemers, Regional Director, Franchise Development, was this year’s recipient at the Annual Awards Ceremony in Atlanta, GA.

Greg Aden, Vice President-Franchise Development (US West) presented the Negotiation Blueprinting Award and honored Shawn by stating, "Shawn used pointed, open questions to truly uncover what was most important to our client. Many of these underlying interests were helpful in broadening our deal. He then had the courage to communicate, and position with the client, what was vital to IHG, its' brands and the various markets involved in their portfolio.  Shawn's leadership and ability to engage the negotiation framework throughout proved to be invaluable for the relationship with Kinseth, our client, and the key markets where IHG needed to make a significant improvement with product."

Pictured above from left to right: