the other side's consequences of no agreement (CNA) 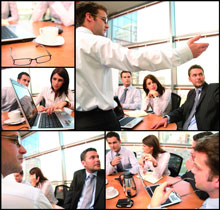 We very often hear people say that's it's difficult, if not impossible, to know the consequences for the other side.  And given the fact that most people don't think much about what it might mean to their customer to lose the deal, it's not particularly surprising that they feel that way.  The fact is, though, your customer really has only three likely Consequences of No Agreement (CNA):

Going to a competitor is the most frequent Consequence of No Agreement for a buyer.  This is because buyers are almost always convinced they can get it better, faster, cheaper elsewhere, relardless of what it is, and whether or not it's true.  But it's never that simple except in the case of true commodities, of which there are very few.  There are always other variables that need to be taken into consideration.  Doing so, that is, using what you've learned about their needs during the sales and negotiation processes to determine the true costs and benefits of going to one of your competitors versus buying from you, you'll be able to show them why it's in their best interest to buy from you based on all the relevant factors, not just price.

Building a solution themselves is probably the next most frequent buyers' Consequence of No Agreement.  It's quite common for a customer to believe that its in-house people can build the same solution as yours, custom-made and for less.  Sometimes, in fact, it's true.  If it is though, there's something fundamentally wrong with your value proposition.  Even though buyers believe they can do it better themselves, more often they can't.  And the best way of making them understand that is to compare the actual costs and benefits of their doing it themselves versus hiring you to do it.

Despite it being called doing nothing, the third most likely Consequence of No Agreement isn't really doing nothing at all.  In fact, what it really means is the buyer is taking the resources he or she would have expended on your offer and using them elsewhere.  Let's say, for example, that you have a customer who has earmarked $100,000 for a consulting project.  You present them with a $100,000 consulting solution, but they come back and say they've decided not to do anything at this time.  Although it may be true that the customer isn't doing anything "externally" with those budget dollars, it may be putting them toward an entirely different project, such as hiring a new salesperson, which is, then, the customer's Consequence of No Agreement.  Under those circumstances, your challenge is to compare the costs and benefits of their hiring a new salesperson versus your consulting solution.

Although these three different Consequences of No Agreement may have different costs and benefits associated with them, it's important to bear in mind that regardless of which Consequence of No Agreement is most applicable to any particular situation, it is essentially always a matter of you versus some form of competition.  That competition may be another company, the customer doing it himself or herself, or the customer using the budget allocated for your product or service for some other purpose.  Remember, too, that your customer will make a decision based on a perception -- probably inaccurate -- of whether what you have to offer will be a benefit for him or her.  For that reason, the best way to prepare yourself for any of these situations is to determine as many costs and benefits associated with both sides' Consequences of No Agreement as you can.

Finally, you may find yourself in a situation in which more than one of these three possible Consequences of No Agreement seems to be appropriate.  In that case, select the one you think is most likely to occur, regardless of which one it might be.