are you prepared to deal with buyers' tactics when negotiating? 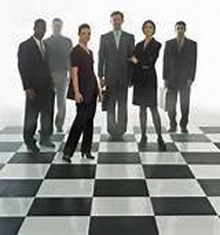 Companies often come to Think! facing a major negotiation hurdle.  Oftentimes, the hurdle is based on perception:  they are intimidated by negotiation, they misdiagnose power or they freeze when they encounter a tactic for which they are unprepared.  The problem is that when we're unprepared, we're much more likely to give in to perception versus reality.  Let's look at some of the traps that are keeping us unprepared or ill-equipped to deal with our buyers' tactics.

Regardless of how many different negotiation traps there are, they all have one thing in common:  fear.  Fear is a negotiation killer, no double about it.  It shuts down your brain and rewires your thought processes.  It makes you do things you normally don't do - and are likely to regret later.  And fear makes your competitors behave in irrational ways that make it hard for you to predict or react to what they do.

What are some of the ways we exhibit fear in the negotiation process?  You, your company and your team prepare to handle negotiation a certain way but when faced with the unexpected or a problem, you become reactionary and defensive rather than managing the negotiation.  Your competence, confidence and clarity are broken, so you give away too much or settle for too little.  Even a little fear is enough to tip the scales to the other side's advantage.

It's okay to feel fear, but it's not okay to let it cloud your emotions and trick you into responding differently than you would if you were not afraid.  Which of these negotiating traps are most likely to snare you?